Vaisesika Prabhu: The basis of book distribution is hearing and chanting and there’s no substitute for that. People can come for a little while, may be interested and do the service, but the hearing and chanting in groups of devotees where there’s lots of discussion about the philosophy, that’s when devotees actually start to feel the inspiration to do it on their own.

Prabhupada told us that we should, in order to inspire devotees to do service, create an atmosphere in which they feel their service is individual, voluntary, and spontaneous. Also, he said that we should create fresh challenges all the time. In realizing each individual’s service capacity and make it spontaneous and voluntary, the hearing and chanting is essential. Devotees need to sit together to hear from the Bhagavad-gita, the Srimad-Bhagavatam, and discuss them. Then there’s a natural inspiration to want to spread Krishna Consciousness because it’s based on pure faith.

There’s no reason to distribute Bhagavad-gita or Srimad-Bhagavatam unless one has pure faith, because then you’ll think, “Well, I’ll go do something else, I can distribute anything. Everyone is selling something.” If one is hearing and chanting and actually learning something from that sound vibration, with the other devotees expressing their doubts, and hearing others take away those doubts, then they’ll actually feel strong. Then, when they meet people, they can infuse them with faith, and they’ll understand that the instrument of passing on that faith comes through the Bhagavad-gita and Srimad-Bhagavatam, and the purports of Srila Prabhupada become one’s life and soul.

So this is the starting point. Anyone who wants to be successful in life has to get a taste for hearing and chanting about spiritual topics. Hearing Bhagavad-gita is non-different form hearing Krishna directly on the battlefield of Kuruksetra so it should be done as a daily function. Without that, maya will crush us, will easily crush us. We are no match at all and we have to be fortified every day with some spiritual program, to fortify us against maya.

Then organizing for sankirtana… that is the most beneficial type of service because everyone can contribute something toward taking out the mercy. This is the essence of religion, to show kindness to all living beings. In that there is no limit to how much you can refine the service, how widely expansive your campaign can become. So if we form a sankirtana party and organize it, then that organization will become more and more refined, and more and more people will be able to use their skills, and it goes on to expand like that unlimitedly.

This is Lord Caitanya’s program: to hear and chant together with the devotees, and then go out and spread the Holy Name, go door to door and meet people and give them the opportunity to also taste that pure faith and then go back home, back to Godhead.

Without sankirtana (propagation of God’s glories) in one’s life everything is boring. With sankirtana, there is life. So everyone should do sankirtana. It’s the yuga-dharma (the recommended spiritual process for self-realization). It is the yajna (spiritual sacrifice for God’s pleasure). Without doing yajna one’s life is inauspicious, unproductive. By doing yajna, even little bit of yajna, sankirtana yajna, life becomes fully auspicious and at every moment one is blessed by the Goddess of Fortune, one has nothing to worry about, and everything will be taken care of by the Lord Himself. So sankirtana is the yuga-dharma. Jaya!

Sastra Dana: Why should one want to engage in book distribution?

Vaisesika: Well, there are several reasons. The reason that I started engaging in book distribution is that a devotee told me that it is a very important service, and that Prabhupada liked it. That was a good reason for me!

There’s something very tangible about this service because when you distribute a book you have something that’s tangible in your hand. It has weight, it has color, it has size. When you hand it to someone and they take it home, that vibration that you’re handing them is the most important thing that’s going on in the universe. Everything else is business as usual, but when there’s an intervention between a devotee and someone who does not know about Krishna consciousness, it will change the course of the universe. There’s an intervention there. When someone comes into contact again with Krishna, eventually their karma will come to an end. It is the all-powerful order of The Lord to distribute this and if one follows it, he will be in line with Lord Caitanya and his life will become productive, spiritually and materially. Hare Krishna.

On the relationship between Sadhana & Sankirtan by HG Satyadeva Prabhu (ACBSP) 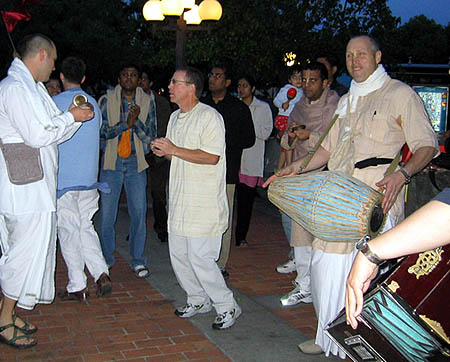 The Supreme Personality of Godhead said: O Uddhava, a saintly person is merciful and never injures others. Even if others are aggressive he is tolerant and forgiving toward all living entities. His strength and meaning in life come from the truth itself, he is free from all envy and jealousy, and his mind is equal in material happiness and distress. Thus, he dedicates his time to work for the welfare of all others. SB 11.11.29

Going out to meet the public on sankirtan takes strength and conviction. When we feel we have something of value, we naturally want to share it with others. With personal experience of the truth, we become spiritually strong and receive deep conviction about the meaning of human life. Faithful performance of our sadhana moves us from a beginner’s theoretical appreciation into the realm of practical awareness of the transcendental reality.

Thus we nourish and maintain our conviction that nama sankirtan is the remedy for the sufferings of all conditioned souls through our personal experience of this truth acquired during sadhana.